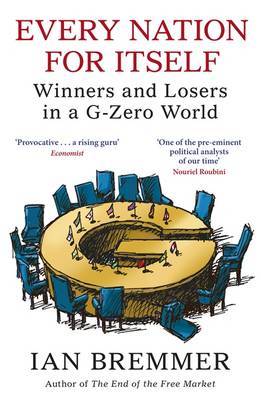 Every Nation for Itself: Winners and Losers in a G-Zero World

Following the acclaim for "The End of the Free Market", Ian Bremmer is back with "Every Nation for Itself", now in paperback, where he addresses the next big issue for the shifting world economy. What happens when nobody's running the world? The United States is in financial crisis and can't hold onto the reins of the G-20. But China has no interest in international leadership, Europe is trying to save the euro, and emerging powers like Brazil and India are focused on domestic development. No government has the time, resources or political capital needed to take an international lead. The world power structure is about to have a vacancy...at the top. Welcome to the G-Zero world, in which no single country has the power to shape a truly global agenda. That means we are about to see 20 years of conflict over economics, finance and climate change. Bestselling author and strategist Ian Bremmer reveals how world powers are rapidly turning into gated communities, locked in competition. Who will prevail?

An author who is always full of insights -- George Osborne Provocative ... a rising guru The Economist One of the preeminent political analysts of our time -- Nouriel Roubini A prodigy in the US global commentariat. Mr Bremmer's rehearsal of the consequences should make us all wise up Financial Times Smart and snappy ... provides the most cogent prediction of how the politics of a post-America world will play out New Statesman

Ian Bremmer is the president of the world's leading global political risk research and consulting firm, Eurasia Group. He has written for the Wall Street Journal, Washington Post, Newsweek, and Harvard Business Review. His six books include The J Curve and The End Of The Free Market.